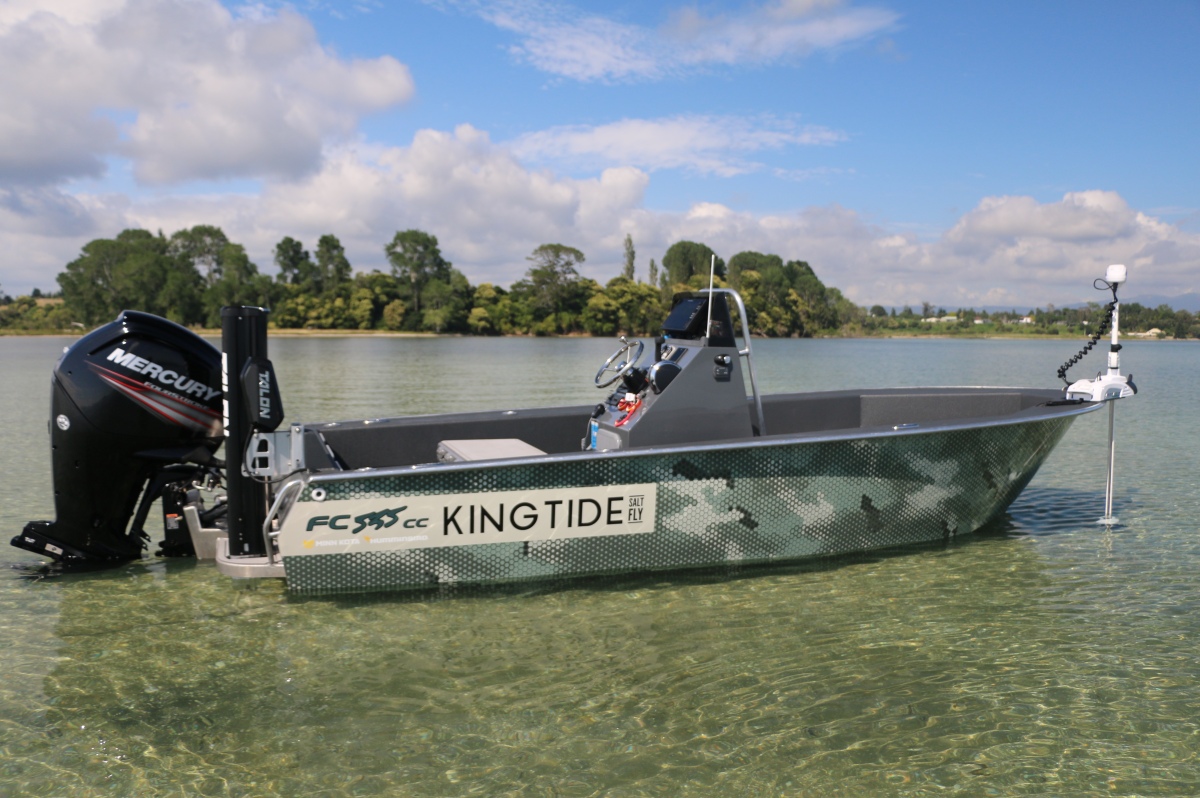 Recently King Tide had the opportunity to create a new guide vessel for the season. Previously running an FC Boats 430 and being really happy with the hull design and performance it was a logical step to run with the same crowd. Maritime survey standards in New Zealand are pretty stringent and after some talks and planning with Ross and Max Christensen at FC we were underway with the build. From start to finish and beyond they were the consummate professionals, from late night demands to last minute decisions Max and the crew made the whole detailed process as a smooth as can be.

At the start of 2018 I also began running another vessel on behalf of BLA. These guys distribute some of the worlds finest marine electronics and chandlery within New Zealand and Australia. Shallow water fly fishing wouldn’t be the same without them and I was glad to be adding some of these crucial tools to the spec sheet during the build.

Without going into too much detail I’ll give a run down on the what, why and how everything came together – if you really want to get into the nitty gritty just book a day with us and find out for yourself what makes this boat really tick, the fish catching is optional.

• FC Boats 535 centre console – Gets into the shallows easily, rides through harbour chop superbly and has one of the best surveyed stability reports for an aluminum boat of its class. Plus it’s considerably drier than other open boats, something I appreciate when being on the water regularly. This is a custom build and has a lot of extras added during the build process, the massive casting platform being the showpiece of the boat.

• Minn Kota – it wouldn’t be the same without it. We opted for the 80lb 24v version as it’s run pretty hard on a regular basis (killing batteries sucks and I’m yet to deplete the battery past 3/4). From stalking fish to positioning clients for the best possible cast it does it all. Linked to the Humminbird sounder it creates a whole other realm of opportunity that really needs to be seen to be believed. The micro remote being my preferred pick as it’s lightweight and has just the right amount of buttons for my kingfish hunting.

Humminbird Solix 12 – MEGA imaging has opened my eyes to just what a sounder is capable of. Sure, I spot fish in the shallows with my eyes for a living but being able to replicate that in deeper water in such vivid detail is just what I needed. Using side imaging to pick fish hanging off marker poles and determine how we present to them is the difference between a good day and a great day.

• Minn Kota Talon 8ft – Holy shit, it’s already made a huge stamp on my fishing applications and proven itself many times over. Being able to pin yourself to a flat and stake out an area is priceless. Seeing big kings amble up a clear sandbar made it all the much better – shame I wasn’t on the rod at that day though..! Once again paired to the Humminbird Solix I have total control from the helm or remote. No more uncontrolled drifting over approaching fish, fullstop.

• Mercury 115 Command Thrust – When you build a boat via a family that race ski boats and love speed it makes sense to keep them happy with motor choice. For me it was about having that little bit extra on the throttle to play with when needed. The economy and power to weight ratio saw the 115HP Command Thrust strapped to the transom without hesitation.

• U-Dek – The spec sheet for the build stated clearly “no f*%ken checkplate” as it’s a total fly line killer. Plus standing barefoot on hard surfaces for a long time is a real ball breaker. Having custom CNC router cut decking pulls the whole boat together nicely and when wet it gets tackier underfoot, something which helps keep the H&S brigade happy.

Other bits and pieces:

Hull wrap – My mate Riki at CMYK created a sleek simple wrap for the hull. It’s camo, they won’t see us coming…

Scanstrut USB Charger – dual ports and totally waterproof, perfect for an open boat and charging all manor of everyday items.

ProMariner battery chargers – 2 of these onboard hard wired to the battery bank and simply plug into the mains. Which means less time at the end of day dealing with charging, plus they maintain and condition the whole system for you.

Icey Tec 105ltr Chilly bin – doubles as a seat. We went for the tiedown option with a clever system that is totally removable for an uncluttered rear casting area if needed. 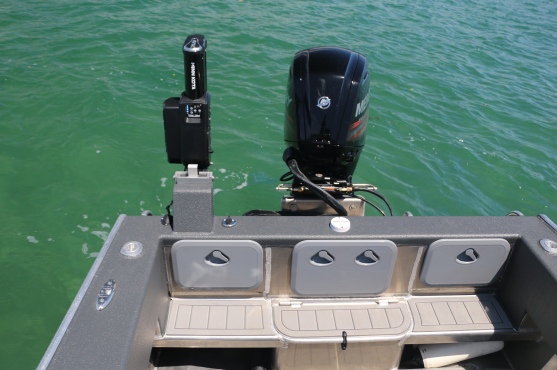 Detail of the removable chillybin tie down eyelets