To say we’ve had an uncharacteristic summer would be like banging on the same drum the wind has been banging on. Constant spring like winds have remained until early February and only recently have we seen some quality days that haven’t involved battling the elements. That said, clients have stepped up to the plate when required and slogged it out during the testing parts of the day – often with reward for their persistence. It helps when you have a harbour that fishes well in most winds and has areas to hide from it during the day if needed. 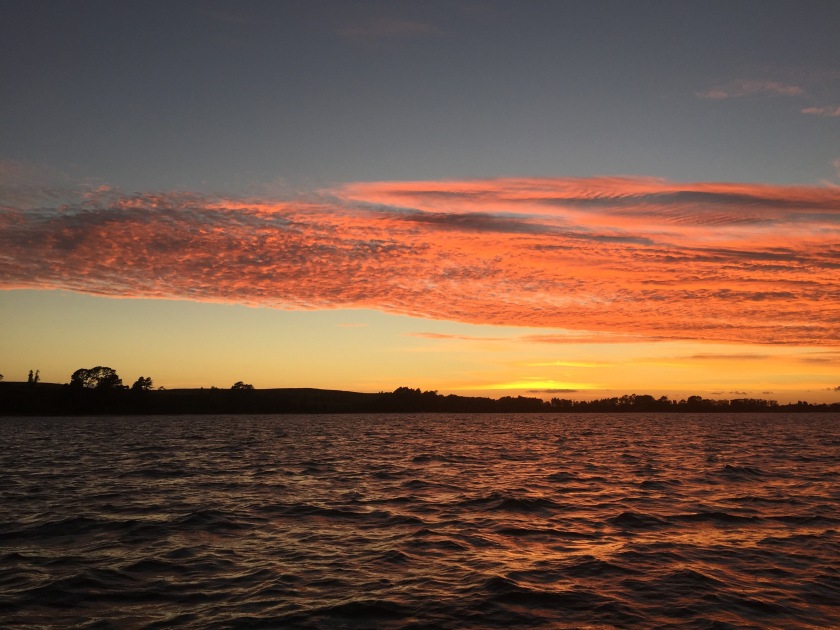 My last report made mention of the marker pole action that was starting to fire up. Since then we have seen loads of fish milling around them at certain stages of the tide. We will see good numbers congregating for the next couple of months and for now the bigger models are also present. One group of fish seen on 2 consecutive days had members punching 30kgs. It was fitting Josh Hutchins from Aussie Fly Fisher was onboard to check out the fishery we have here and was rewarded with one of the smaller fish from the mob.

This capped off a memorable 3 days fishing with him that went from good, to great, to phenomenal. The bite times lasted quite a while and it wasn’t too hard to find fish in between Josh getting around 2000+ images for his ever growing portfolio. 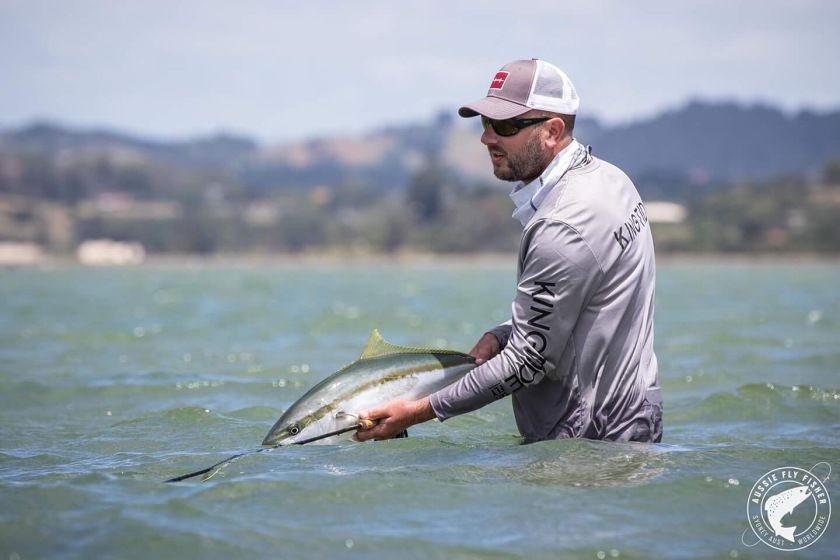 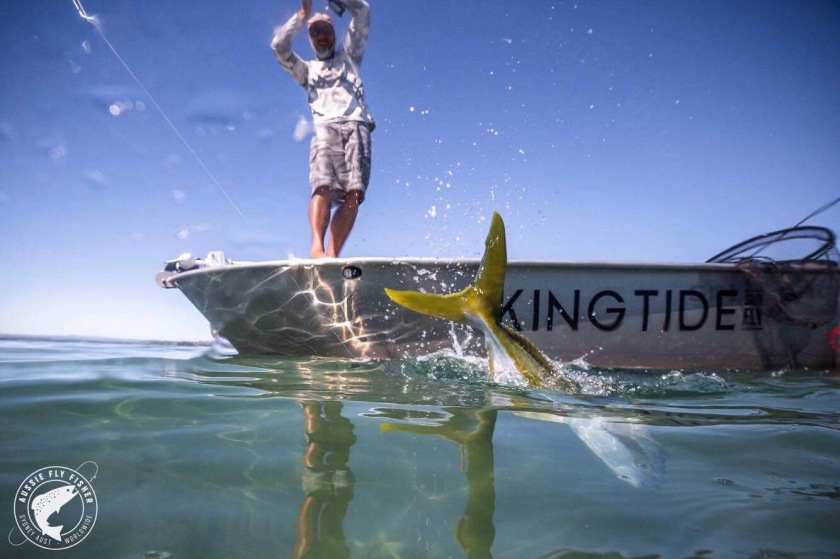 Next up we had some of the boys from Manic Tackle Project, we popped two Ray Rider cherries that afternoon. We also popped a few manus (Kiwi slang for splashy bombs bro) off the boat in the heat. Unfortunately we didn’t manage Cams fish, he got pushed overboard to chase some while we battled another so fair credit to him “Hey Cam, you got a phone in your pocket?” 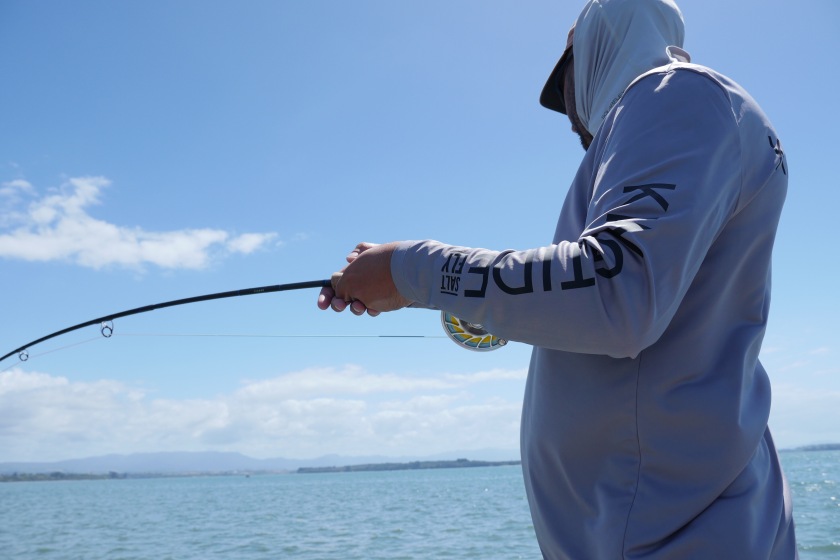 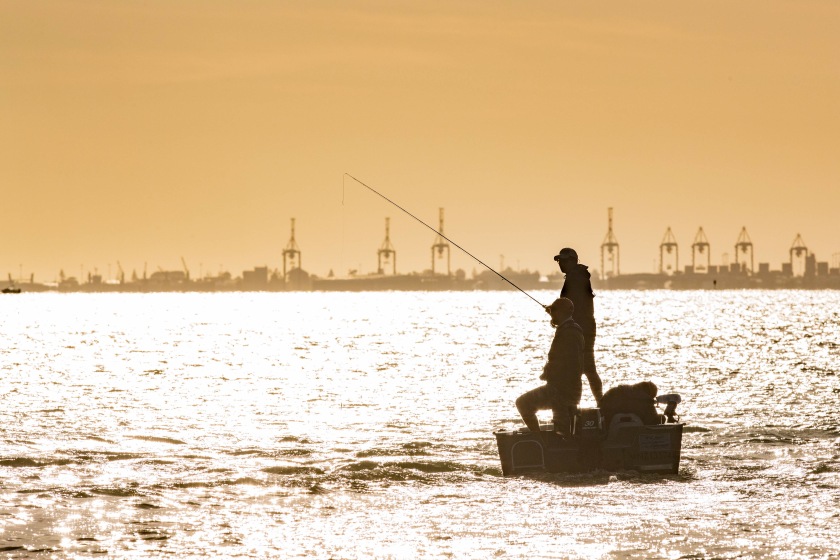 The fish currently on the flats are receiving a fair amount of pressure, in particular the town side fish that see both waders and boat traffic chasing them. They still have to eat (or get pissed off with your fly) so make sure the first cast counts. Often I have my anglers ensure their line isn’t hung up, we have a good angle on the fish and they take a breath to steady the nerves prior to casting. Easier said than done when your shot can come and go in a heartbeat. This all goes out the window of course when your best cast gets rejected and a snarled pile of line gets hammered. The humbling nature of these fish will keep you coming back for more.

There has been quite a few younger guys getting into salt fly here lately. It’s really satisfying seeing them develop more skills during the day and consequently nail a Kingfish. Father and son Rob and Norman Dines being the latest duo to accomplish this. Norm is currently building a fly rod and I’m told he’s now working overtime to complete it. 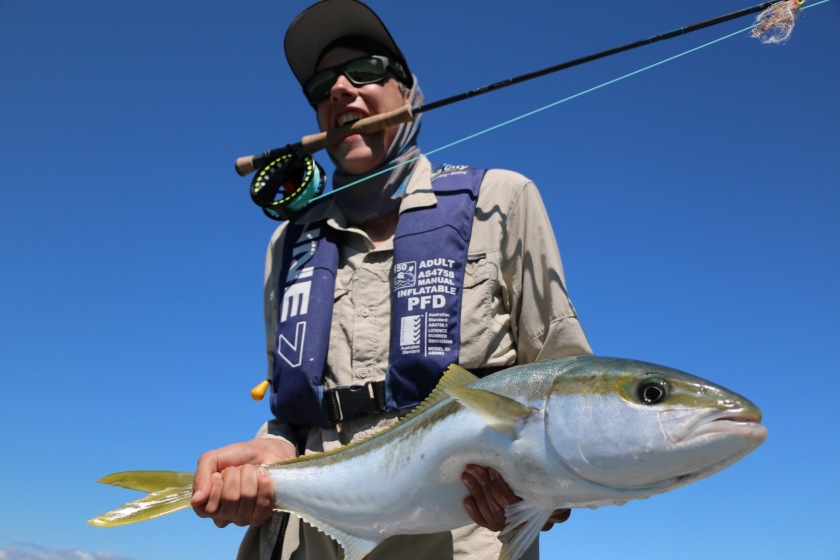 Water clarity has been superb (it got a bit dirty with our first decent rain event but cleared quickly) and the sea lettuce is dying off – albeit a few weeks later than normal. Cloud cover can’t be controlled but easily tolerated and worked with, some of these days have been glass outs so seeing wakers is a lot easier. You really have to take what you get on these occasions. 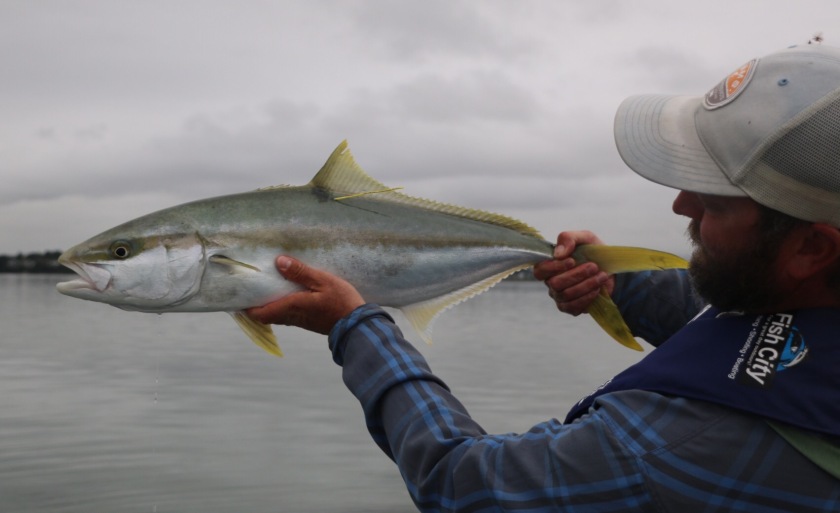 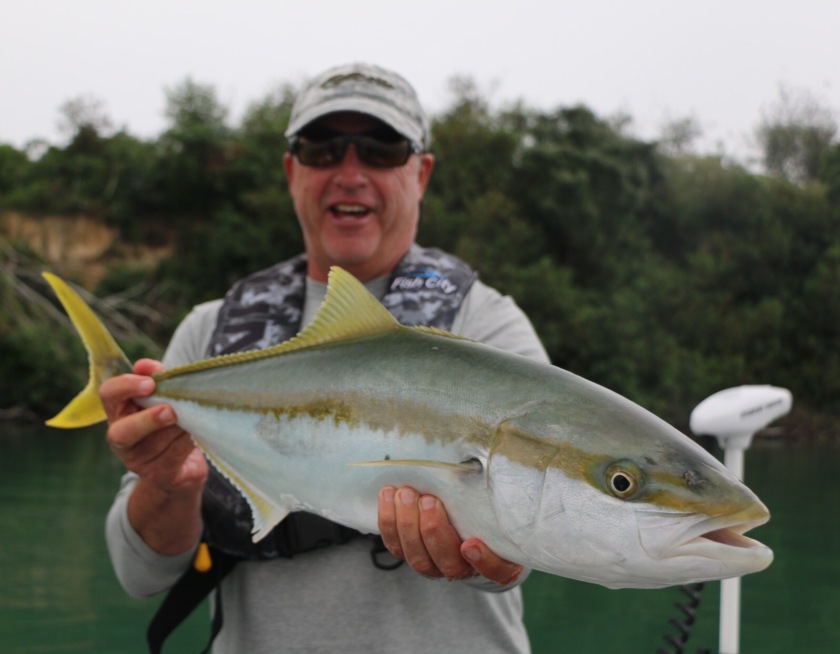 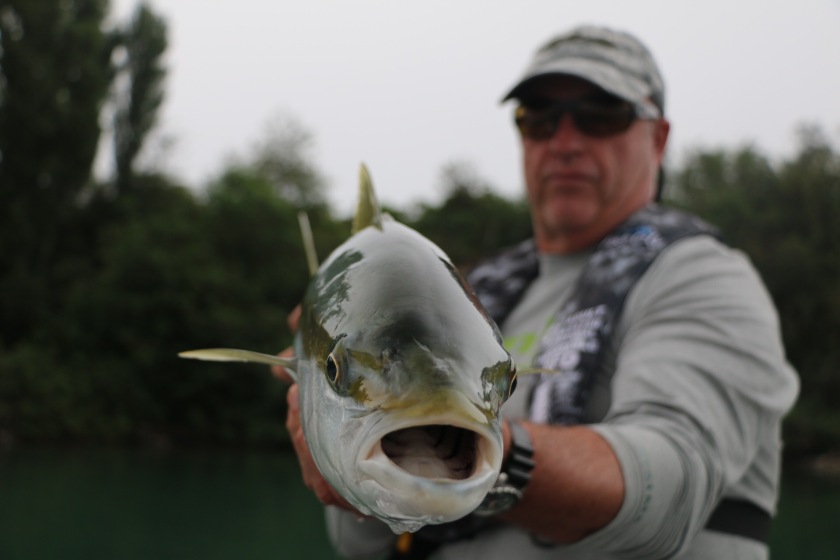 Baitfish are in epic numbers and the predators that follow are well aware of this. Packs of Kingfish working the shallow shoreline and cartwheeling bait into the trees above being a real standout. This time of the year sees the harbour at maximum capacity and will last for a few months like this until the water starts to cool dramatically. We have spaces left for March, April and May so if you’d like to get a taste of it let me know here. 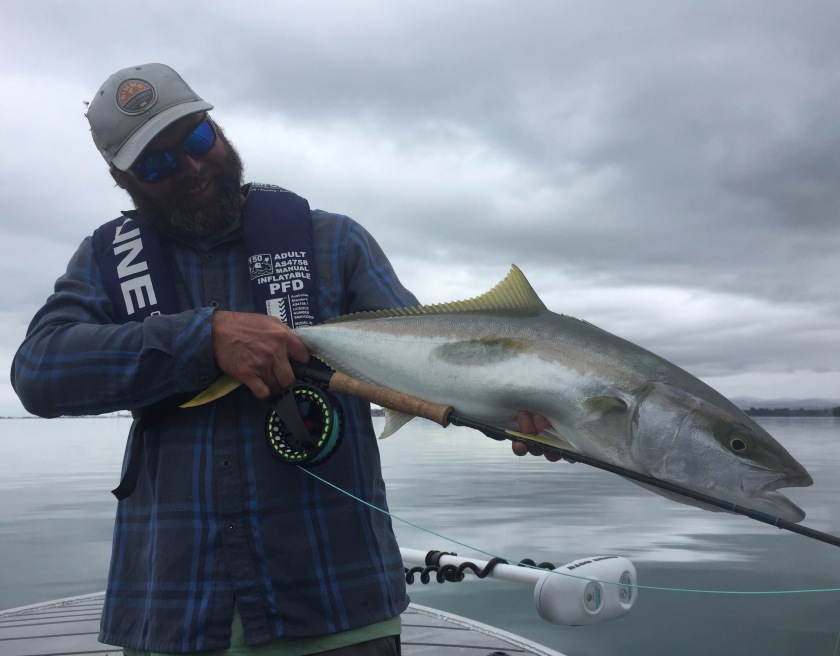 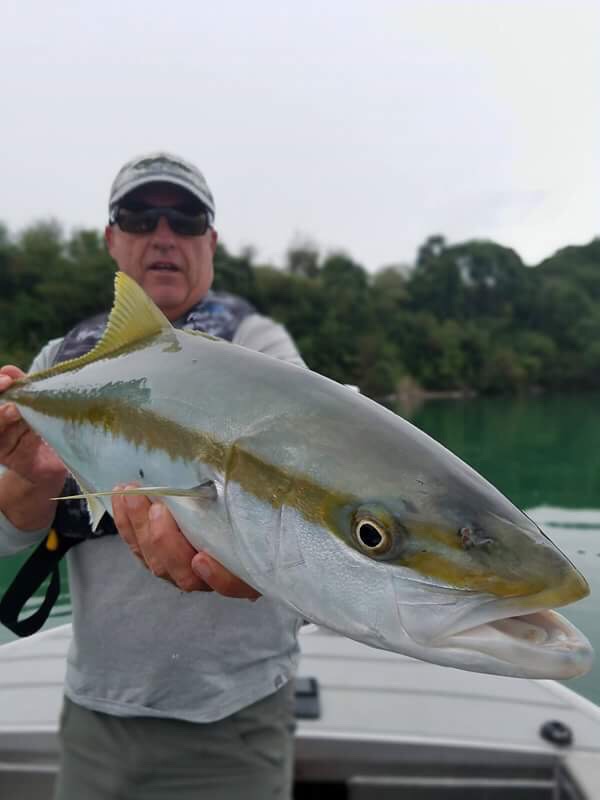 The Salt Fly Hook Up is just a few days away and already participants are hitting the Harbour. Great to see the growth in this sport being embraced by more and more people each week. At this stage there are around 60 confirmed attendees, almost double from last year.

I’ve had a fortnight off the water welcoming the arrival of our daughter and am looking forward to getting back into it this week. Margot Piper Allen entered the world an hour after her due date and right on high tide. We’re all doing well and settling back into the swing of things.

During this time I did manage to finally catch up with Helen Cadwallader and see her research into Stingrays here in Tauranga. The article can be read here.

All the best for the coming months