Firstly a Happy New Year to everybody. I made it to 0005 hours, just! This time it wasn’t the liquor that claimed me, just a hectic few weeks on top of a busy year.

Pre Christmas fishing was a lot tougher than the year previous. The limited chances on offer were normally met with tight lipped, stubborn or spooky fish. A lot of persistent 25+ knot westerly winds made spotting difficult and conditions far from ideal. Some days were ok though and a few fish made it onto the hook, some to the net. 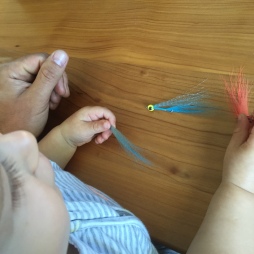 The boy and his new toys. Windy day activities. 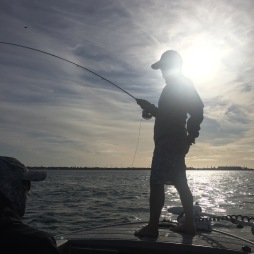 Then the switch flicked and from boxing day I was getting good reports daily from people. The next available day for us to get out coincided with a full moon and we were back to the struggle. Sometimes you just have to roll with the punches. 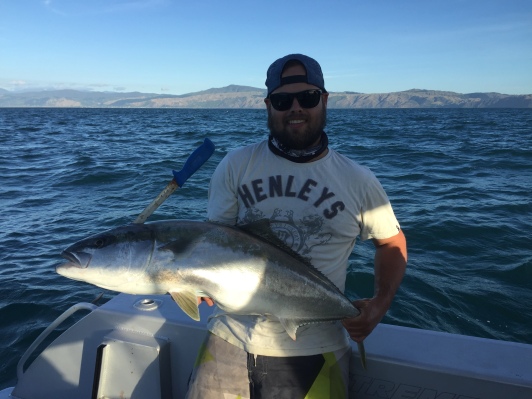 Capt Marshall at his best 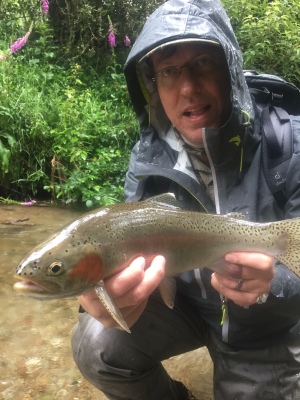 Plan B when it’s pushing 35 knots plus 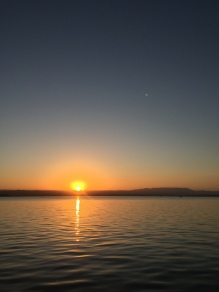 First non windy night in a long while 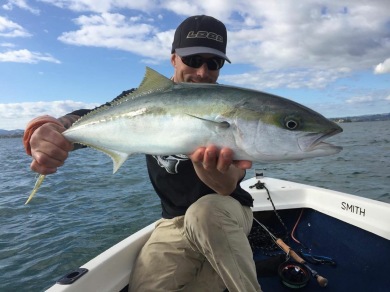 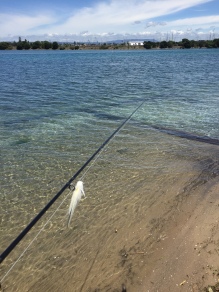 It wasn’t until I had a week off with the family and some friends that we struck gold. Tom is an old fishing hack and good fishing mate. He doesn’t get out often so when he does he makes it count. He was converted to the ways of salt fly after a hot session on a work up that lasted in excess of 3 hours. We had packs of huge kahawai going nuts on bait and mobs of hoodlum kingfish smashing everything. Poppers and 2/0 baitfish were order of the afternoon. 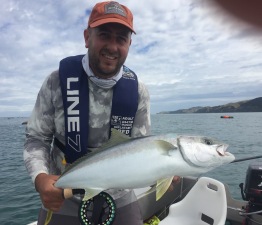 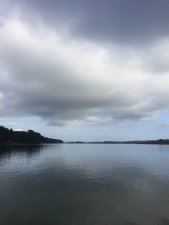 Well well, the old no wind trick. Flat flats are the best.

Tom getting warmed up before a good dusting on a big kingfish.

Amongst the decent sized rats there were some big kings around the 20kg mark. They would show up and make themselves known straight away. Tom hooked one right at the tip of an 8wt and proceeded to get royally spanked. There was a lot of line on deck and that wrapped around an obstruction, ending in our undoing. We talked about it all the way home and won’t forget that moment in a long time.

Super clear water at Whangamata had us sighting packs of yellowtails 15m under the boat. We had to resort to dropping a small jig through them to raise them to a sunken fly. It was crude and effective fishing as they were not too interested in eating, just smashing things in anger. If you can’t catch them, piss them off.

Damn good fun catching kingfish over and over. 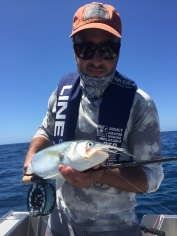 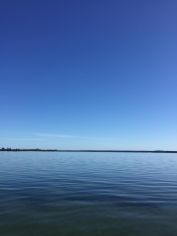 Tauranga has 200sq kms+ of harbour to fish. Including a lot of flats to explore.

The black rays that were strangely absent are now a very regular feature on most flats in Tauranga harbour. Sunday just gone being the best day yet. We must have sighted 15, some of them big and dominant. The ray riding kingfish were present on some and we happily picked a few off one by one until they had enough of our games.

Markers are holding at certain times and make for fun boat maneuvering if they don’t play ball once hooked. Walk the dog and hope it’s the time that they run from the area of trouble, not back at it.

“The Mount” and some shit water

This one co-operated and came to the boat 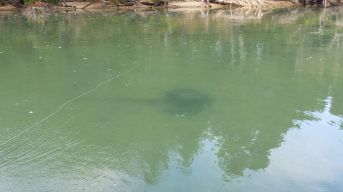 What it’s all about

Over this full moon phase I’d expect the bite times to shorten a little but there is action to be had as the harbour is crawling with fish. We had a mullet launch itself broadside at the boat as a kingfish chased it. Last we saw indicated it wasn’t going to a happy place – easy mouthful for that fish. Might have to start throwing flies at the boat hull in future and call it the stunned mullet technique.

That’s pretty much the current state of things. It’s looking like a very good season ahead, one that will drag out longer than normal after a less than ideal start.